About the Yomiuri Shimbun Group

The Yomiuri Shimbun has three headquarters in Tokyo, Osaka and Fukuoka. Each headquarters has an editorial department that handles reporting; an advertising department in charge of newspaper ad sales and production; and a sales department. Each also contains a production department responsible for building and maintaining the logistics system that spans from receiving articles to printing and shipping the paper; a culture and sports project department that handles exhibitions, sports events and other events; a human resources and administration department. The Tokyo head office also has a digital services department.

The Yomiuri Shimbun by the numbers 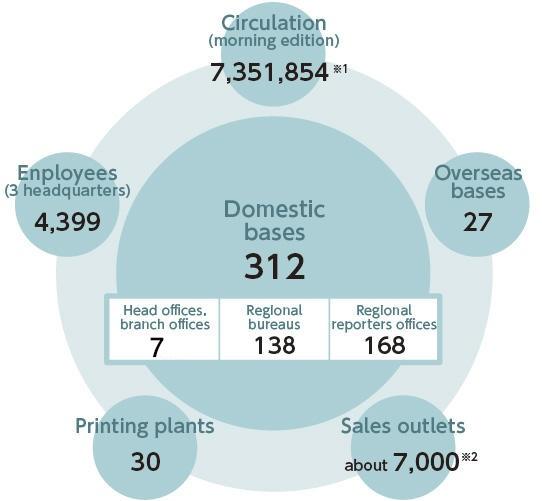 Beneath The Yomiuri Shimbun Holdings, there are three newspaper companies, the Yomiuri Giants professional baseball team, and the publishing company Chuokoron-Shinsha, Inc.

The Yomiuri Giants baseball team was established in 1934 at the behest of then Yomiuri Shimbun President Matsutaro Shoriki and was originally called the Dai-Nippon (great Japan) Tokyo Baseball Club. The Giants have won numerous league championships and are frequently the top team in Japan.

Chuokoron-Shinsha is a relatively new company established in 1999 with a 100% capital investment from The Yomiuri Shimbun, taking over the business of the venerable publishing company Chuokoron-sha, which had a 100-year history. The company is a leading player in Japan's publishing industry, printing numerous magazines and books, including the Chuokoron magazine, one of the primary venues of public discourse in Japan.

The Yomiuri Shimbun group also includes other companies active in a wide variety of fields. The Yomiuri Shimbun Holdings is the primary shareholder of the Nippon Television Network Corporation, for example, which was established as the first commercial broadcasting station in Japan in 1952. Today it is one of the dominant commercial broadcasters with a national network of over 30 stations.

The Hochi Shimbun Co., Ltd. publishes the daily sports newspaper The Sports Hochi, while Marronnier Gate Co.,Ltd. operates Marronnier Gate 1~3, which is located in the fashionable Ginza district of Tokyo and houses restaurants and apparel shops.

Counted among the premier orchestras in Japan, the Yomiuri Nippon Symphony Orchestra is the only orchestra in the world that is owned by a newspaper company. The Yomiuri Riko Gakuin (science academy) operates vocational schools offering courses in medicine, welfare and broadcast video. The Yomiuri Light and Humanity Association supports disaster victims and persons with disabilities.